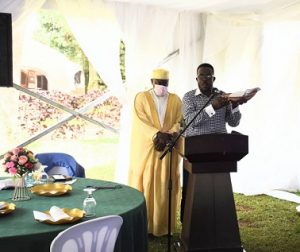 Apostle Charles Tumwine of the New life Harvest Church Buwate commended WSACCO for having demonstrated the highest degree of discipline and consistency compared to other Cooperatives in the country.

Apostle Tumwine who led the prayers on behalf of the Christian faith appreciated the SACCO leadership and the entire staff for the great job done in transforming the lives of soldiers.
He asked them to maintain the same spirit and encouraged them to keep their integrity levels high.

Sheik Suleiman Lubega Gugwa- The Chairperson of the Imam’s Council of Uganda who prayed on behalf of Islamic faith thanked Wazalendo for thinking about giving back to the Lord.
He appreciated the discipline of the army and their relationship with the communities within which they work.

Sheik Sulaiman emphasized that without peace and stability no institutions can prosper.
He observed that in the past, soldiers were not good people to associate with and thanked Allah for the good army Uganda has now.

The Vice Chairperson Board of Directors Col Chris Ogumelaki who represented WSACCO’s BOD Chairman Maj Gen Sam Kavuma, appreciated the good working relationship between the BOD, SUPCO and management which he said has enabled WSACCO to grow and serve its members better.

He thanked the Management team for the zeal and selfless efforts during the year which made WSACCO perform well amidst COVID 19 pandemic challenges.
In the same vein he thanked the BOD for making sure that the management is always supported and given everything they require in order to perform better.
He added that a lot is required to ensure that WSACCO is in position to compete with other financial Institutions in the region.

The vice chairperson of the Supervisory Committee WSACCO Lt Col Abdul Mukiibi congratulated all the managers of the SACCO upon the great achievements registered in the year 2021 and encouraged them to remain focused and even aim higher.
He also challenged the staff to remain focused on the purpose for which WSACCO was established.

The Chief Executive Officer Col Joseph Freddy Onata thanked God for yet another important day in the history of Wazalendo SACCO. ” We have endured difficult moments occasioned by COVID 19 containment measures. Some of our staff contracted the virus. Quoting from book of Numbers 39: 48 – 49 in the Bible, Col Onata reported to the BOD that he had taken count of his troops after the battle with COVID 19 and none was missing. “We never lost any life during the year ” Col Onata emphasized.

He said that thanksgiving is the time to thank God for the past and present but also it is time to seek his favour as WSACCO launches into the new year 2022.
He noted that it is time for individual staff in WSACCO to audit their contribution at both individual and institutional levels.
He also challenged each staff to do a personal assessment to determine how hard they have worked to improve members’ welfare and their own welfare.

Col Onata informed the congregation that WSACCO has achieved almost all of its targets that were set for the year 2021. He said celebrating is worth because the 16 years journey has not been simple.

He said that all the money that was collected at the Thanksgiving shall be donated to the less privileged ” The Missionaries of the Poor” in Kisenyi in order to touch lives of our community.

In attendance also was, the members of the BOD, SUPCO, top management and all staff under scientific set up.